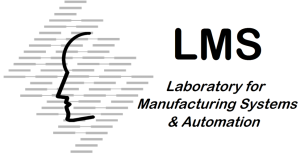 The Laboratory for Manufacturing Systems & Automation (LMS) of the University of Patras has been founded in 1994 and is oriented on research and development in cutting edge scientific and technological fields. LMS researchers work on a variety of research subjects including production systems planning and control, software development for industrial networking, innovative manufacturing processes, virtual reality engineering applications, and quality control and metrology. LMS is involved in a number of research projects funded by the CEU and European industrial partners. Particular emphasis is given to the co-operation with the European industry as well as with a number of “hi-tech” firms. LMS is under the direction and technical coordination of Professor George Chryssolouris. It is organized in three different groups:

Finally, LMS is also well known in the manufacturing community for its contribution to the science of manufacturing via a rich collection of scientific and technical papers produced. More than 500 (five hundred) publications in international refereed scientific journals and conferences have been authored by LMS, earning international acclaim and attracting thousands of citations.

Role in the Project: LMS is the leader of ManuLearn Activity. The main focus of LMS is to derive the methodology and set-up the TF network, based on the proven track-record in manufacturing-oriented education, Teaching and Learning Factories. Moreover, LMS is in charge of the piloting activity in Greece. LMS acts as a network node for local manufacturing enterprises in the region of Western Greece and it is responsible for outreach activities in Bulgaria.